I had been planning on writing some summer movie reviews this week, but then I ran into this story:

The guy was killed by a swan. A goddamn swan!

I’m fascinated by this story.  I just keep imagining him in some sort of afterlife therapy group for people who have died unexpectedly.  He’d be surrounded by people who blew up after deciding to load up the lawnmowers with nitro or pissing on electrified train tracks, each describing their own date with destiny.

Finally after everyone else had spoken, the counselor turns and says, “Tony, why don’t you share how you came to join us.”

Tony, looking down at the ground, mutters under his breath “sonofabitchinswangotme.”

The rest of the group looks at each other, someone says “Did he say he was killed by a swan?” then laughter, and the poor dude ends up walking out of group, head down, forever to walk the afterlife, looking for other victims of crazed waterfowl.

Anyway, it got me thinking of all the stupid ways I’ve almost left this mortal coil, and since I can summarize the three summer movies I’ve actually seen in about 5 words (Avengers – awesome, Prometheus – crushingly disappointing, Amazing Spiderman – eh…OK), I’ve decided to recount them  instead.

Drowning in an underwater hole:

I’m about four years old.  Walking in waist high water with my Mom when the ground under my feet suddenly disappears and I’m underwater.  Apparently someone had dug a giant hole at low tide that filled with water once the tide came in,  and I had the awesome luck to walking right into it.  I remember looking up, seeing sunlight dappling the surface above me and having no idea how to swim.  I have no clue how long I was underwater, but I remember actually being somewhat resigned to my watery fate…even felt somewhat peaceful.

For my Mom’s part, she turned around and the spot I had just been in was empty.  She was a bit panicked, looking around trying to figure out where I was, until she saw a clump of what she originally thought to be seaweed.  She reached down and hauled me up, ‘by the hair of my head,” which up until that point had been something she had only threatened to do.

The Outcome:    Aside from the occasional belief that I actually died that day and everything since was a dream (see Ladders, Jacob’s), really not much of anything….no fear of the beach or the ocean…no aquatic superpowers.

Fast forward 8 years and I’m climbing the foothills around Westpoint, NY.  I’ve got my walking stick in hand and imagining myself to be the intrepid explorer, Sir James, about to conquer Mt. Knipper in the name of the crown.  Suddenly, I hear what sounds like puppies whimpering somewhere in the woods ahead of me. Like the 12-year-old dumbass I am, I set off in search and nearly stumble into a wasp nest.

Unfortunately (or fortunately as it turns out), the wasps decided “nearly” was as close as I would get and proceeded to sting the hell out of me.  I turned tail and came screaming down the mountainside at around Mach3, a cloud of wasps surrounding me like the worlds worst Snuggie. Needless to say, Mt. Knipper remained unconquered that day.

One week later, I’m home, my encounter with the wasps a painful memory.  Back at the job site, one of the construction workers, a big guy with arms the size of hams, finds himself chased up a slag pile by a bunch of dogs.  A few days after that, a game warden stops by and warns my father that a pack of feral dogs was somewhere on the mountainside.  Oh, and by the way,  THEY HAD BROUGHT DOWN A FULL-GROWN DEER!  You know,  one of those animals with pointy antlers, razor sharp hooves, and about 100 more pounds than your average 12 year old boy.

A little while later, they found the dogs along with a litter of feral dog puppies.  Turns out if it weren’t for those wasps, I would have been 90 pounds of puppy chow.

The Outcome:    Delusions of Grandeur.  It’s obvious, isn’t it? Fate had sent those wasps to turn me away and keep me from being eaten by Shenzi, Banzai, and Ed so I could share these words of wisdom and hilarious little bon mots with the rest of the world via KnippKnopp.  All of you loyal readers should go thank the Wasp Lord now.  Wait…don’t go away yet.  I still have three more!

Set upon by an angry mob

Two years later, I’m waiting for my Mom to pick me up from some Nerd-oriented event at my High School.  I’ve got my little suit, my clip on tie, my circa 1984 feathered hair helmet…all of which screamed “Beat Me Up”.  As I’m waiting, a group of guys come walking up the school driveway, and after some small talk, request rather forcefully that I give them some money.

At this point, my Fight or Flight response malfunctions.  See, ordinarily, when a five foot eight kid who goes about 140 and whose most strenuous activity involved rolling d20s finds himself surrounded by a group of boys of various size and athleticism, including a 6 foot tall blonde dude who looked like he ate football players for lunch, the appropriate response is to run like hell for the Wawa that’s less than ½ a block away. For some reason, my response that day was to push the 6 foot tall, football player eating monster….which resulted in this:

My mother showed up about six seconds after the back of my head hit the asphalt.  The ironic thing though is that it wasn’t the beating that nearly killed me…it was the slight concussion that addled my brain enough to make the trip across the street a bit adventuresome.  I took a long looping walk into traffic, nearly getting creamed. When my head cleared, I managed to get across the street and into my mother’s old Plymouth.  The most interesting part of the evening was watching my mother go all Mama Grizzly after she saw my face. She hit the gas and proceeded to chase the pack of kids, roaring “I’m going to kill them!”  She had them squared up in her headlights like Mookie in Christine, but they managed to get outside the parking lot before she could squish them flat. 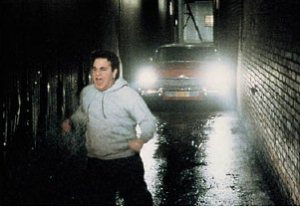 I’m actually glad she didn’t catch them.  I have no doubt if she did, my kids future visits to Mom-Mom would require talking through bars and turning over anything that could be used as a weapon to some nice ladies in blue uniforms.

The Outcome:    fractured orbital and cheekbones.  Fifteen minutes of popularity.  I have to admit, for a nearly invisible, attention whore like myself, the beat down did have its upside.  Girls who rarely said two words to me suddenly wanted to know what happened.  Tough guys who usually provided me ample motivation to take the long way to the cafeteria promised to find and beat the crap out of whomever did it.  The problem is, we never found out who did it.  The police were unable to find anything, I provided descriptions, looked through school yearbooks,  but no one ever rang any bells.  In hindsight, it would have probably made more sense to look at pictures of the blond guy’s fist, since that was the only thing I really saw clearly.

OK, I admit, I’m not sure how close to death I was this time, but it does sound damn cool. Not long after I turned 30, the back pain and occasional leg numbness I had experienced most of my adult life started increasing in magnitude.  An MRI revealed a small tumor growing way down the bottom of my spinal cord.  After another year of observation, said tumor had nearly doubled in size so the decision was made to slice it out before it made my legs do really funky things – like stop working.  The scalpel-wielding surgeon was actually excellent, and not crazy at all, though he did seem angry an inordinate amount of time.

The surgery turned out to be the easy part.  The hard part was the masochistic nurse who decided to check my urine outflow about ten times that first night by holding the bag up above his head. Every time he did this, everything that had already flowed out of me decided to follow gravity and flow back into me, against all the laws of nature and weenie-dom.

The Outcome:    A bitchin 4-inch scar on my lower back.  Life insurance rates that tripled.  Unfortunately, it looks like my dream of a butterfly tramp stamp will never be realized, though it does give me the opportunity to lie and tell people I was skewered hunting wild boar. More unfortunate, when I went shopping for life insurance a few years after the surgery, I found the type of tumor is one that on rare occasions can return and take up residence at the top of the spinal cord (as in my big noggin’). Even though considered extremely rare, it was enough risk for the insurance companies and now I pay higher rates for 30-year-term than my 68 year old father.

Choking to death on a piece of toilet paper

Yes.  You read that right.  I nearly died from a piece of toilet paper the size of a ladybug.  I had cut myself shaving (nasty habit) and had staunched the bleeding with a little fragment of toilet paper.  A few moments later, I yawned or took a deep breath or something and the little speck of toilet paper that had been clinging to my upper lip decided at that precise moment to depart.  It got caught in my inbound breath like the bad guy in a jet engine and somehow managed to travel down my trachea into my lungs.

I choked, great wracking coughs that literally took me to my knees, and I continued choking for several minutes, until black lines started expanding into my field of vision, my heart thudded in my chest, and pain spiked my temples.  My head hurt for three days afterwards.  I honestly believe I was thisclose to a stroke.  A week after the incident, I developed bronchitis for the first and only time of my life, and while the doctor said it was probably unrelated, I can’t imagine a blood-soaked little wad of crap paper having any good effect on the inside of your lungs.

The Outcome:  My wife slapped my upside the head and called me a dumbass.

Hmmm…come to think of it, beaten to death by the story-time lady….now that would be an interesting way to die.

3 Replies to “My Five Favorite Brushes with Death”